William ‘Bill’ Mercer was born January first 2015 to Ian and Malissa Mercer of the CAS.

Neither of his parents believed the Awakening was a good thing, but they generally didn’t have much use for these hatreds until their son was born an Elf. Neither responded well.

Ian took the perspective that his son was basically handicapped, that being an elf made him less a man then most, unable to aspire to any honorable blue color profession. He constantly suspected the young William of wrongdoing and would refer to him as ‘freak’ ‘Mistake’ and the like. Beatings weren’t a regular occurrence until Ian took to drugs, which he blamed for everything even as he used them.

Malissa, on the other hand, effectively refused to admit that he was an Elf. She constantly tried to made him wear hats to hide his ears, kept him away from other Metahumans, specifically elves, and deterred him from any interest in things of an Elfy nature. When Ian lost his job she started to fall apart, eventually suffering a mental breakdown a few months after Bill had moved out.

This combination of treatments resulted in a very unhappy young Bill, who sought refuge from his shitty parents in his local punk scene. His innate musical talent earned him credit and his penchant for fighting at any racist remark earned him respect from his fellow Metas.

It was at this time that he met Sera, a young elven girl in comparable straits as him, with abusive parents and no way out, she’d taken to partying too hard and fights she couldn’t win. It was love at first sight.

Then the riots started. Anti-meta sentiment had been growing steadily since the Awakening, and fueled by Humanis it erupted into violent riots, lynchings and in some places full blown genocide.

The initial wave of violence caught many off guard, but it took only hours for the Metahuman populations, backed by punks, anarchists and a number of criminal organizations to retaliate with overwhelming force.

William was at the forefront of the Battle of Dallas, along with Sera and many of their friends. At one point Bill found himself under fire from Humanis ‘troops’ with automatic weapons. His charged them with sword and a Riot Shield he’d picked up. Unbenounced to him, his charge took him past the news crew for a local station and by the time the riots concluded he was becoming the poster child for the counterattack.

It was also during these riots that he encountered his Mentor spirit for the first time. He and a few others had broken through Humanis lines and won another block when the spirit of the Dragonslayer appeared and congratulated him and informed him that he was Awakened. It was impressed by his efforts and bravery and offered to help him learn to use his Magical gifts to better fight the Dragon that was Humanis. In the thick of battle the offer of power was irresistible, William accepted the spirits offer and has held to the Dragonslayer ever since.

When the smoke cleared there was no question who had won the day. The surviving leadership of Humanis sought refuge from the CAS Government but received little aid, many fled the country or went into hiding. This victory, though hard won, was hollow for William as hours passed with no sign of his beloved Sera. Days passed and she was eventually labelled as ‘missing’ her remains were never recovered and though William holds little hope that she is alive he has been as yet unable to truly get over her.

With his heroics before a camera Bill seemed briefly set to become a public figure, he appeared on a few talk shows and a news interview, he was set for another when footage of his beating down a teenager for wearing an anti-meta shirt hit the matrix. The beating was one of many such aftershocks of the riots, but because of his fame and being caught on camera Bill’s support dried up almost instantly. Pro-Meta poligroups who had previously sought him out as an ally now condemned him, and any help he may have had finding Sera was gone as quickly as it had come.

The decades since have been a mixed bag for Bill. haunted by his memories of the Riots and driven to hurt Humanis at every turn, Bill is hardy a stable employee. His music continues to gather fans as he moves around and he supports himself on a smile and a song.

Now he finds himself in Boise, gateway between three nations. His time alone has given him much to consider, and now, with all he’s seen, Bill Mercer is ready to have someone at his back. He only hopes he can trust them, and that his new friends can aid him in the battles ahead. The Dragonslayer is at his shoulder, the world is ahead and the Hellbats MC is his home for as long as it lasts. 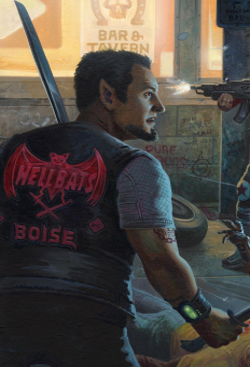