Run gone bad and need the cops off your back? Think Kit.

A tall elven woman with a digitally enhanced helmet, that displays: text, images, and video. Her right arm is clearly cyber-ware.

She was on a flight from Chicago to Seattle at the age of ten when a turbulent force ripped the right wing off the (seven forty seven) and the plane came plummeting down. She lost her family on that flight and was missing her arm. Taken in by a cyber doctor, she lived fairly well, though haunted by the tragic events of her youth. When she was of age instead of getting her first car like most teens of her parent’s lifestyle, she got her arm. made and designed by her eccentric adopted father.

A few years after her operation she had got an apartment of her own and was doing small time espionage contracts for various employers. Her adopted father had since passed away, leaving her alone in the world; with no living family.

She is always seeking a thrill, it reminds her of those last moments with her father; plummeting to earth in a (seven forty seven). 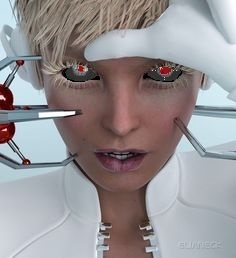