Xin has used what he learned in the monastery to give him an air of professionalism. Since he has been back in the US he has worked to refine his hand to hand and pistol skills. He is physically gifted and has always had a knack for sticking to the shadows and talking himself out of corners.

Born in Seattle as Neop Brodenhurst. He lived a childhood full of abuse and was frequently getting in trouble with the law for theft. Neop ran away from home at age 15 and stowed away on a freighter to southeast Asia. Slowly over the next year he made his way to the Pangboche Monastery and there he spent the next 5 years of his life, he changed his name and tried to distance himself from the life he knew before.

Never taking advantage of the opportunity to become a monk at the monastery, at age 21 Neop, now Xin, made his way to Hanoi to help with aid work through the monastery. He quickly became an integral part a small buddhist community in SE Hanoi. When militia groups started to make their way into their part of the city Xin and a small group of others decided to begin to defend themselves. He was a part of half a dozen covert missions to try and de-stabalize or at least slow down the encroachment of the militia group. He was caught on his 7th mission. Thrown in a prison camp he met another American-Biff Tannon. They had a teppid relationship but they both both possessed a set of skills that they each realized would help them escape. A month later they did.

Xin and Biff made their way back to the US and ended up in Chicago where Biff still had some connections. Xin worked a few jobs with Biff for the Saints gang. When Xin had enough money he split off on his own. Biff helped him get in contact with a Mr Johnson or two. Eventually a run in with Lone Star introduced him to Ellis DeWald, a mid level agent for the security giant. Ellis had him dead to right on a heist that Xin was running. Half of Xin’s cut was all it took to gain Ellis’s loyalty.

For the past few months he had been working as a runner in Chicago, Seattle and most recently had a mission in London. The team encountered a hoard of ghouls and successfully fought their way out. Unfortunately Xin was bit and no one has seen or heard from him since 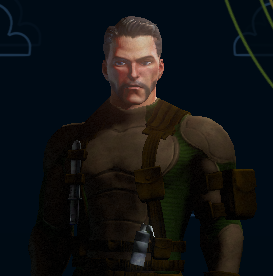